SEOUL, South Korea — North Korea defied the likelihood of more sanctions by the United Nations Security Council to launch a rocket on Wednesday, demonstrating that the government of its new leader,Kim Jong-un, was pressing ahead to master the technology needed to deliver a nuclear warhead on intercontinental ballistic missiles.
Enlarge This Image 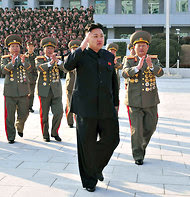 North Korean leader Kim Jong-Un  defied the likelihood of more sanctions by the United Nations Security Council to launch a rocket Wednesday.
The Unha-3, or Galaxy-3, rocket blasted off from the Sohae Satellite Launching Station in Tongchang-ri on North Korea’s western coast near China on Wednesday morning, a spokesman for South Korea’s Defense Ministry said.
“That’s all we can confirm right now,” the spokesman said, speaking on condition of anonymity until his government made an official announcement.
It was not immediately known whether the rocket has succeeded in fulfilling North Korea’s stated goal of putting a satellite into orbit.
North Korea has said its three-stage rocket would carry an earth-observation satellite named Kwangmyongsong-3, or Shining Star-3, and that it was exercising its right to peaceful activity in space.
But Washington and its allies have said they think that North Korea’s rocket program has less to do with putting a satellite into orbit than with developing a delivery vehicle for a nuclear warhead and trying to turn the country into a more urgent threat that Washington must deal with by offering diplomatic and economic concessions.
While North Korea may still have other technological thresholds to cross, like the miniaturizing of its nuclear weapons, a successful launching of a satellite into orbit would suggest that the country had overcome a major hurdle in its efforts to demonstrate its potential of mating its growing nuclear weapons program with intercontinental ballistic missile capability.
A failure would be an embarrassment for the young Mr. Kim, who has been struggling to establish himself a new North Korean leader hailed at home and feared abroad. Whether the launching was successful or not, Mr. Kim, by attempting a second rocket launching in the first year of his rule despite international condemnations, was dashing hopes among some analysts that he might soften North Korea’s confrontational stance.

Instead, he was seen as intent on bolstering his father’s main legacy of nuclear weapons and long-range missile programs to justify his own hereditary rule.
Only Monday, it told the rest of the world that it had found a technical glitch with its rocket and needed until Dec. 29 to fix the problem and carry out the launch. . Outside analysts have been speculating what might be going on behind the dark cover North Korean engineers had put up around the launching pad to prevent United States spy satellites from watching.
“A successful test would raise as a top-line national security issue for the Obama administration the specter of a direct North Korean threat to the U.S. homeland,” Victor D. Cha and Ellen Kim wrote in a recent analysis posted on the Web site of the Center For Strategic and International Studies.
Mr. Kim hardly needed another failure. The North’s first rocket launched since he took over following the death of his father a year ago broke apart shortly after blast-off in April, forcing his regime to admit to the failure in front of the foreign journalists it had invited to watch the test.

This time, North Korea did not invite foreign journalists. Nor did the government announce the launching plan to its domestic audience. South Korean officials said this suggested that the regime intended to cover it up if the satellite launching failed or declare the launching a success regardless of the outcome, as it had before.
The missile capabilities of a country as opaque as North Korea are notoriously hard to assess. United States and South Korean officials have said that all of the North’s four multiple-stage rockets previously launched have exploded in mid-air or failed in their stated goal of thrusting a satellite into orbit.

Still, then-Defense Secretary Robert M. Gates said in early 2011 that North Korea was within five years of being able to strike the continental United States with an intercontinental ballistic missile.
Wednesday’s unusual winter-time rocket launching came five days before the one-year anniversary of the death of the Mr. Kim’s father, Kim, Jong-il, on Dec. 17, which his son tried to mark with a fanfare aimed at showcasing his dynasty’s achievement in empowering the small and impoverished nation.
It also came a week before its rival, South Korea, was scheduled to elect its new president on Dec. 19. 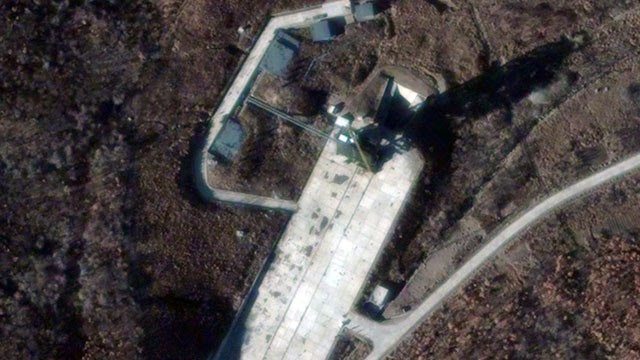 Mr. Kim needed to redeem his April humiliation not only among his country’s enemies, who he feared would not take him as a worthy foe, but also among his people who have grown increasingly disenchanted with his government’s inability to resolve the prolonged economic crisis, South Korean officials and analysts said.

Follow@nytimesworldfor international breaking news and headlines.
Twitter List: Reporters and Editors
Since he took power a year ago, Mr. Kim has tried to cement his authority by implementing what analysts described as halfhearted economic reforms among some farms and factories, highlighting the perceived threats from the country’s external enemies, and most recently, raising the specter of a reign of terror through talks of “squashing rebellious elements” at home. A series of top military generals have been fired or demoted in recent months.
“North Korea believes that a successful launching of the rocket would give more force to its claim that it is a nuclear weapons power,” South Korea’s Unification Ministry said in a recent analysis.
Although the launching was driven in part by domestic considerations, analysts said it carried far-reaching foreign relations implications, coming at a time when the new leaderships chosen or in the process of being elected in Washington, Beijing, Tokyo and Seoul were trying to form a new way of coping with North Korea after two decades of largely fruitless attempts to end its nuclear and missile ambitions.
North Korea’s growing nuclear and missile capabilities cut both ways for the government. They strengthen its leverage in negotiations with Washington and gives its government and people a sense of self-empowerment with a true nuclear deterrent. But they further isolate the country, which can hardly feed its own people without outside help.
The United Nations Security Council considered the rocket launching a violation of its resolutions, which barred North Korea from nuclear weapons and ballistic missile technology. It had imposed a growing list of trade restrictions and financial sanctions against the North for its previous rocket tests.

But doubts remained over how effective those penalties were on North Korea, which has survived decades of economic sanctions and found in China a patient patron whose desire to shore up its client regime with trade and aid appeared not to have been hurt by Pyongyang’s repeated flouting of its entreaties for restraint.
The latest rocket launching came amid signs that American officials have tried in vain to dissuade North Korea from launching rockets.

In a statement in October, North Korea’s National Defense Commission said that when “midranking policy makers from the United States. National Security Council and C.I.A. recently met with us in official and unofficial settings,” they tried to assure the North Koreans that Washington had no “hostile” intent against Pyongyang.

“But the reality clearly showed that the messages we received from the United States were lies,” it said, citing the United States’ agreement to let South Korea nearly triple the reach of its ballistic missiles, putting all of the North within their range.
The Washington-Seoul missile deal was to help South Korea better deter North Korea’s expanding missile capabilities. But North Korea called the deal a hostile move and said it now felt freer to test “long-range missiles for military purposes.” North Korea has tried hard to force Washington to accept it as a nuclear power, a status that it hoped would give it more leverage in its talks with the United States and its allies.

North Korea aimed to use those negotiations to win a peace treaty and normalized ties with Washington, as well as massive economic aid.

TOKYO —
Japan did not try to shoot down a North Korean rocket as it passed over its southern island chain of Okinawa, the government said Wednesday, strongly condemning the launch.
Tokyo confirmed the launch had taken place and that said it believed parts of the rocket had fallen into the sea off the Korean peninsula, with another part dropping into the ocean near the Philippines.
“Launch time was around 9:49 a.m. The missile that North Korea calls a satellite passed over Okinawa around 10:01. We launched no interception,” a government statement said.
Japan had been on high alert since the 13-day lift-off window opened, despite a suggestion from Pyongyang that it could delay the much-criticized blast-off.
Tokyo deployed missile defense systems to intercept and destroy the rocket if it looked set to fall on its territory, with missile batteries in and around Tokyo and in the Okinawan archipelago.
Japan reacted quickly to the launch on Wednesday, with national media informed by government-run alert system.
“It is extremely regrettable that North Korea went through with the launch despite our calls to exercise restraint,” chief government spokesman Osamu Fujimura said. “We cannot tolerate this. We strongly protest to North Korea.”
The impoverished but nuclear-armed nation insists the long-range rocket launch—its second this year after a much-hyped but botched mission in April—is for peaceful scientific purposes.
But the United States, and allies South Korea and Japan, say Pyongyang’s launch was a disguised ballistic missile test that violates U.N. resolutions triggered by its two nuclear tests in 2006 and 2009.
In Seoul, South Korea’s Yonhap news agency quoted military officials as saying the launch appears to have been a success, with all three stages performing as planned. “The rocket stages fell on areas in line with its earlier announcement and the launch appears to be successful,” the agency quoted the officials as saying.
- December 12, 2012
Email ThisBlogThis!Share to TwitterShare to FacebookShare to Pinterest
Newer Post Older Post Home