Subhanallah...
Strange Thing in Masjid Al Nabawi, it can be anything, a shadow like sun beam, a jinn or an angel.Allah knows best, we have no clue nor we claim,Whatever is this, its amazing & Intresting.﻿
Officials deny seeing anything strange at the Prophet's Mosque after video goes viral of a white figure sitting amongst worshipers. Sheikh Gazi Al-Mutairi, Professor of Prince Naif chair for Haia at Madinah Islamic University cautioning people against jumping to conclusions without concrete evidence.
Source: Arab News

Note: This video is not fake, nor any editing is done and the source of footage is Sunna Al Nabawia Channel. We analysed the video several times and got the two images as above, in one you can see the glowing person and in the second one same person in dull mode (Normal Human Being).It proofs that there was some source of light when the camera was focusing that person, in second opinion it can be a glitch or error in camera or back systems in tv control room, in both scenario no jinn nor angel.Haramain.info is one of the largest haramain blog on internet and its our duty to clarify misunderstandings among people, this video got around 1.5 Million views and still increasing, people are using social networks to discuss about this video, so its our little effort to clear confusions.If you doubt our authenticity, we recommend to ignore this message and move on.JazakAllahHR Staff

- December 11, 2012
Email ThisBlogThis!Share to TwitterShare to FacebookShare to Pinterest

The next generation of military drones, unveiled by a leading US manufacturer, will not just carry a limited supply of rockets – but will likely be fitted with an ultra-light laser, capable of repeatedly destroying objects at the speed of light.
“It would give us an unlimited magazine,” a person close to the High Energy Liquid Laser Area Defense System (HELLADS) program told Time magazine.
Over the past four years, the Defense Advance Research Project Agency (DARPA) has given contractor General Atomics over $60 million to develop and then scale HELLADS – a powerful 150 kW ray with a difference.
Current lasers of that strength – enough to destroy an incoming rocket or plane – are bulky, which means they can only be placed on stationary defense systems.
HELLADS, which DARPA says is in the “final development stage,” is radically lighter. It will weigh only 750 kilograms – less than a very small car.
This vastly opens up its potential uses.
A key application of HELLADS is in the new generation of unmanned aerial vehicles (UAVs), better known as drones. 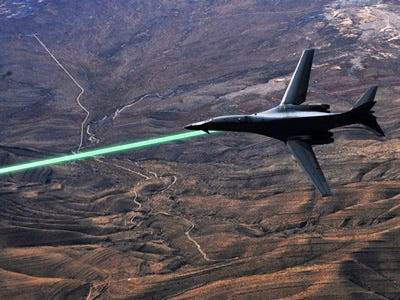 In a digital video advertising its own Predator C Avenger drone, General Atomics shows a formation of UAVs annihilating a shower of ground-launched interceptor missiles in a split second, before making them an offensive weapon and targeting objects on the ground.
The capacity of the laser is likely to be multiplied by the capability of the Predator itself. General Atomics believes the most efficient use of the relatively cheap, high-speed drones will be as a large “swarm” of integrated units that can overcome even a large defense network, at the expense of a small amount mechanical casualties.
The bold claims have to be weighed against several reservations.
Neither the UAV nor the laser have reached mass production stage, and although it is evident that the US Air Force sees drones as crucial to its future, the success of the Predator is not yet guaranteed.
Another is the natural limitation of the laser. While it can be easily recharged and work for hours on end, unlike a conventional missile, a laser weapon cannot easily penetrate clouds or smoke with its rays. Essentially, HELLADS will have to see its target before it can shoot it, making its use most likely against missiles and enemy planes, rather than ground-based targets. 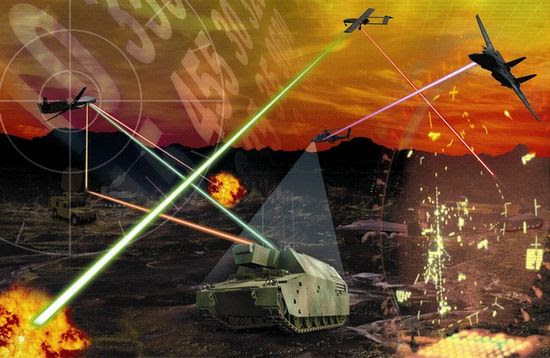 Proponents of the new generation of lasers say that despite their nickname of “death rays,” lasers will help to reduce collateral damage with their precision, and mute the ethical criticism that has dogged drones since they have become the preferred method for picking out specific US targets.
Russia, Israel and other leading arms manufacturers say they are working on their own versions of similar portable lasers, though the US developments appear to be at a more advanced stage.
- December 11, 2012
Email ThisBlogThis!Share to TwitterShare to FacebookShare to Pinterest
Newer Posts Older Posts Home
Subscribe to: Posts (Atom)