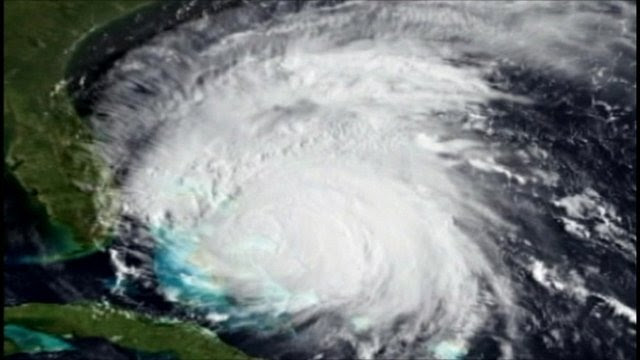 President Barack Obama has warned that Hurricane Irene, currently looming off the east coast of the US, could be a "historic" storm.
Seven states from North Carolina to Connecticut have declared emergencies ahead of Irene's arrival.
Mandatory evacuations have been ordered in parts of four states, and in low-lying areas of New York City.
The category two storm has weakened a little and is expected to make landfall with winds of up to 100mph (155km/h).
Irene, which has already caused havoc in the Caribbean, is expected to hit the coast of North Carolina on Saturday before barrelling northwards to Washington and New York City a day later.
'Don't delay'
At 14:00 EDT on Friday (18:00 GMT), the storm was 300 miles south-south-west of Cape Hatteras, North Carolina, the US National Hurricane Center said.
Continue reading the main story

Mr Obama, on holiday in Martha's vineyard, an island on the Massachusetts coast, said in a statement to reporters: "I cannot stress this highly enough: if you are in the projected path of this hurricane, you have to take precautions now.
"Don't wait, don't delay. We all hope for the best, but we have to be prepared for the worst. All of us have to take this storm seriously."
He added: "All indications point to this being a historic hurricane."
The White House later said Mr Obama was returning a day early from his break to Washington to lead the government's response to the storm.
NY subway to shut
Irene, the first hurricane of the Atlantic season, could affect up to 65 million people in major cities along the east coast from Washington to Baltimore, Philadelphia, New York and Boston - the most densely populated corridor in America. 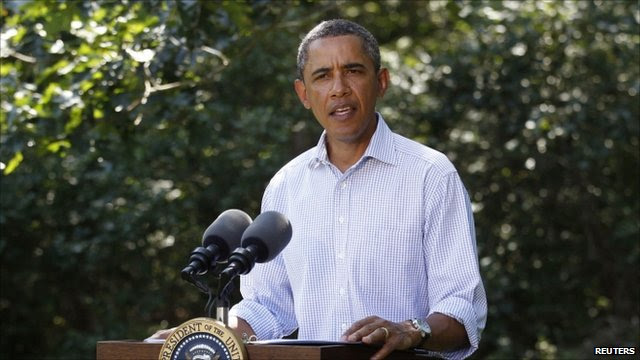 Click to play
President Obama: "If you're in the way of this hurricane you should be preparing now"
"We're going to have damages, we just don't know how bad," Craig Fugate, head of the US Federal Emergency Management Agency, told the Associated Press news agency.
"This is one of the largest populations that will be impacted by one storm at one time."
If it hits New York and New England at category two, it will be the region's strongest storm since Hurricane Bob glanced off Massachusetts in 1991, and Hurricane Gloria, which caused extensive damage to New York City in 1985.
Irene boasts hurricane force winds extending 90 miles from its centre, and tropical storm winds reaching up to 290 miles from the eye.
The American Red Cross said it was preparing dozens of emergency shelters along the east coast.
States of emergency have been declared in North Carolina, Maryland, Virginia, Delaware, New Jersey, New York and Connecticut.
Mandatory evacuations have been ordered in parts of Delaware, Maryland, New Jersey, North Carolina and in the nation's biggest city, New York.
New York Governor Andrew Cuomo said the state's transport network, including the New York City subway, would close from midday on Saturday. 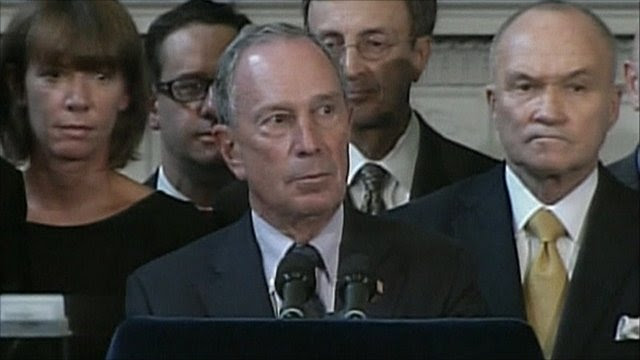 Click to play
New York Mayor Michael Bloomberg issues 'mandatory' evacuation order
In Washington DC, Sunday's dedication of the new memorial for Martin Luther King Jr - which President Obama had been expected to attend - has been postponed until at least September.
The power company serving the Washington area advised of "potential widespread power outages" at the weekend.
Amtrak, America's passenger rail service, announced it was cancelling train travel south of Washington on the east coast, and airlines predicted widespread disruptions to flights.
Tropical storm-force winds have already begun buffeting North Carolina's coast.
More than 200,000 people are evacuating from coastal parts of the state, while residents hoping to ride out the storm are stocking up on food, water and fuel.
US authorities are warning of dangerous storm-surge seas, high waves and rip-tide currents up the east coast as far as Maryland's Eastern Shore.
In Virginia, the US Navy has ordered its Second Fleet to leave Norfolk Naval Station in Virginia to head out to sea to avert damage to the vessels in port.

- August 27, 2011
Email ThisBlogThis!Share to TwitterShare to FacebookShare to Pinterest

Another iconic symbol of the American Independence has a crack in it.  TheWashington Monument, built to commemorate the first president of the new United States Republic, General George Washington was damaged as the result of the August 23, 2011 5.8 magnitude earthquake that struck 84 miles southwest of the heart of the republic, Washington DC.  The crack in the Washington Monument is one of many very symbolic signs that history may declare marked the beginning of the 2nd American Revolution.
A civil war appears to have begun between the American Eagle (U.S. Air Force) and British loyalists that have commandeered Washington DC and Wall Street.  The two large earthquakes that struck the U.S. on August 23, 2011 may have literally drawn a line in the sand.  Both earthquakes shook the very foundation of America.  The entire nation may have felt the beginning of their 2nd war of Independence.
The Washington Monument was built as a dedication to the father of the United States of America.  The leader who was “first in war, first in peace, and first in the hearts of his countrymen”, George Washington was the dominant military and political leader of the new United States of America from 1775 to 1797, leading the American victory over Britain in the American Revolutionary War as commander in chief of the Continental Army, and presiding over the writing of the Constitution in 1787.
As the unanimous choice to serve as the first President of the United States, he built a strong and financially secure nation that earned the respect of the world.  On August 23, 2011 Americans were reminded with the shaking of the ground beneath them and the cracking of the Washington Monument that the time has come to reaffirm their Independence.  A line has been drawn.  The American Eagle has sent a clear warning to the British that Americans will not give up their Independence.

Air Force tunnel boring machine links deep underground military bases across U.S.
I was pointed to this overlooked piece of evidence by someone who claimed to be with the United States Air Force.
The story submission appeared to be sent by mistake as nothing was visible in the body of the submission.  Instead of sending it to the trash I thought I would apply an old intelligence trick I was taught back in 1989.
I right clicked my mouse on the body of the submission and selected all, then copy.
I then opened up the notepad and selected paste from the menu.   You would expect nothing to be pasted as there was nothing in the body of the submission but, just as I thought, a paragraph was pasted into the notepad.
What was revealed was 1 paragraph whereby who ever sent it stated he was a member of the United States Air Force.
He stated that the Virginia 5.8 magnitude earth “wasn’t a natural earthquake and not a HAARP earthquake”.  He told me to find a seismograph of the Washington DC area earthquake and compare it to a past earthquake.
Then he stated that I should Google DUMB or Deep Underground Military Bases.  He ended by stating “the ABC warnings are real”.  I tried to trace the IP of the submission but they don’t exists.
Based on the discrepancy between a natural earthquake and an underground nuclear detonation (used seismographs from the North Korea underground nuclear detonation and past U.S. underground nuclear tests), it would appear that yes there was an earthquake but an earthquake created as a result of an underground nuclear detonation.
It would also appear that the United States Air Force has intercepted a nuclear bomb that was being transported via the deep underground tunnel systems that links secret deep underground military bases across the United States, to Washington DC.
It would appear that some people in the United States Air Force are taking action to prevent another false flag attack on US soil.  It is good to know that there are still people in the United States military who are upholding their oath to defend the United States from all its enemies, both foreign and domestic.
U.S. military personnel, dedicated to protecting the United States, its people and the United States Constitution have intercepted CIA/MOSSAD nukes that were in transit from the CIA’s underground Denver base to Washington DC on August 23, 2011.
The CIA/MOSSAD were transporting the nukes underground in tunnels built by the United States Air Force that connects secret underground bases throughout the United States.
In case of a cataclysmic natural disaster or nuclear attack the United States government now has the means to go underground and stay underground for weeks, months, years or until such time as it is safe to return to the surface.
Those tunnels makes it possible for the president and a handful of others to escape Washington DC via underground to other parts of the country not affected by a natural cataclysmic disaster or nuclear attack.
The U.S. military allowed the nukes to be transported out of Denver (the CIA base is under Denver International Airport) to what they call safe areas.
Safe areas were preselected to minimize the damage and nuclear fallout should the people that were transferring the nukes prematurely detonated the nukes.
The two earthquakes that struck the U.S. yesterday August 23, 2011 were the result of the U.S. military efforts to prevent another false flag attack against the United States.
Thanks to those brave men and women those nukes were intercepted in scarcely populated remote areas.  The first interception took place outside of Trinidad and under a mountain and the second interception took place under farmland 84 miles SW of Washington DC.   No major damage has been reported above ground.
Short URL: http://presscore.ca/2011/?p=4009
- August 25, 2011
Email ThisBlogThis!Share to TwitterShare to FacebookShare to Pinterest
Newer Posts Older Posts Home
Subscribe to: Posts (Atom)