Identification of two items of debris recovered from beaches in Mozambique

Introduction : On 27 December 2015 and 27 February 2016, two items of debris were independently found, approximately 220km apart, on the Mozambique coast.

Both items were delivered to the relevant Civil Aviation Authorities in Mozambique and South Africa in early March 2016. Assistance from the Australian Transport Safety Bureau (ATSB) was requested by the Malaysian Government in the formal identification of the items to determine if they came from the Malaysian Airlines Berhad (MAB) Boeing 777 aircraft, registered 9M-MRO, operating as MH370.

The parts were packaged in Mozambique and South Africa respectively and delivered safe-hand to the ATSB in their original packaging, in the custody of the ICAO Annex 13 Safety Investigation Team members.

The following is a brief summary of the outcomes from the debris examination. This debris examination summary is released with the concurrence of the Malaysian ICAO Annex 13 Safety Investigation Team for MH370.

On arrival into Australia, both parts were quarantined at the Geoscience Australia facility in Canberra. The parts were unwrapped and examined for the presence of marine ecology and remnants of biological material.

Visible marine ecology was present on both parts and these items were removed and preserved. The parts were subsequently cleaned and released from quarantine.

Part No. 1 The first part was initially identified from a number stencilled on the part (676EB), as a segment from a Boeing 777 flap track fairing (Fairing No. 7) from the right wing (Figure 1). 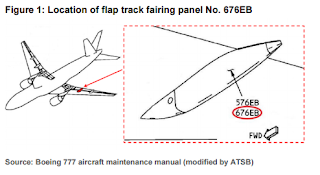 All measurable dimensions, materials, construction and other identifiable features conformed to the applicable Boeing drawings for the identified fairing. The 676EB stencil font and colour was not original from manufacture, but instead conformed to that developed and used by MAB during painting operations (Figure 2). All measurable dimensions, materials, construction and other identifiable features conformed to the Boeing drawings for the stabiliser panel. The part was marked on the upper surface in black paint with “NO STEP”.

The font and location of the stencil were not original from manufacture, however the stencilling was consistent with that developed and used by Malaysian Airlines (Figure 4). 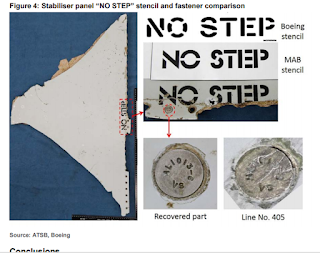 A single fastener was retained in the part. The fastener head markings identified it as being correct for use on the stabiliser panel assembly. The markings also identified the fastener manufacturer. That manufacturer’s fasteners were not used in current production, but did match the fasteners used in assembly of the aircraft next in the production line (405) to 9M-MRO (404) (Figure 4).

At the time of writing, ongoing work was being conducted with respect to the marine ecology identification as well as testing of material samples.

The results from these tests will be provided to the Malaysian investigation team once complete. Nevertheless, from the initial examination it was concluded that: