Zig Ziglar: Quotes That Can Change Your Life

Zig Ziglar died today at age 86. A World War II veteran, Zig Ziglar became the top sales person in several organizations before striking out on his own as a motivational speaker and trainer.
Ziglar wrote over two dozen books and amassed a following of millions who were encouraged by his lessons for success.
Below are 10 quotes from Zig Ziglar that have the power to completely change the direction of one’s life.
1) “Remember that failure is an event, not a person.”
2) “You will get all you want in life, if you help enough other people get what they want.”
3 ) “People often say motivation doesn’t last. Neither does bathing—that’s why we recommend it daily.”
4) “There has never been a statue erected to honor a critic.”
5) “People don’t buy for logical reasons. They buy for emotional reasons.”
6) “Expect the best. Prepare for the worst. Capitalize on what comes.”
7) “If you go looking for a friend, you’re going to find they’re scarce. If you go out to be a friend, you’ll find them everywhere.”
8) “A goal properly set is halfway reached.”
9) “Your attitude, not your aptitude, will determine your altitude.”
10) “If you can dream it, you can achieve it.” 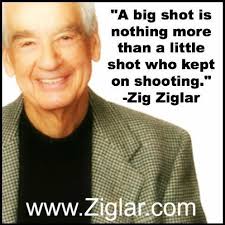 In Zig Ziglar’s world, the morning alarm rang on the “opportunity clock.” And “if you aren’t on fire” when you get to work, “then your wood is wet.” And you have to remember that “money’s not the most important thing in life, but it’s reasonably close to oxygen.” And there will be setbacks, but “failure is an event, not a person.”
Mr. Ziglar, a motivational speaker whose “Success Rallies,” “Born to Win” seminars, more than 25 self-help books and countless audiotapes attracted millions of devoted followers with homespun advice on career advancement and moral uplift, died Nov. 28 at a hospital in the Dallas suburb of Plano. He was 86.
He had pneumonia, said his executive assistant, Laurie Magers.
Rising by one’s bootstraps through the “power of positive thinking” has long been a compelling narrative in American lore. Few messengers of prosperity have been able to sustain a relentlessly upbeat and lucrative career for as long as Zig Ziglar.
Zig Ziglar! A human exclamation point! The world’s most popular motivational speaker, as he was often described, was always excited because “you never judge a day by the weather!”
He was a presence at corporate retreats and conferences for firms such as IBM and J.C. Penney. For the general public, some people paid $49 to hear him live or $1,595 to buy his complete written and audio package. He won over crowds with his faith-filled proverbs and earnest metaphors about setting goals and facing down adversity.
“If you’re going to have to swallow a frog,” he said in his Southern drawl, “you don’t want to have to look at that sucker too long!”
Or: “You can get everything in life you want if you will just help other people get what they want!”
Or: “Have you ever noticed that people who are the problem never realize it? They’re in denial. They think denial is a river in Egypt!”
Or: “The more you gripe about your problems, the more problems you have to gripe about!”
What his words lacked in depth, they made up for in conviction.
“I’ve asked myself many times how Zig can say the same things people have been hearing all their lives, and instead of getting yawns he gets a tremendous response,” his friend Fred Smith, the former FedEx chief executive, told Texas Monthly in 1999.
“I think he’s a little like Billy Graham, who has never really departed from the same sermon he was giving back in his 20s yet who’s never lost any effectiveness,” Smith said. “After all these years, Zig still devotes every day to living this life he talks about, to applying some eternal truths about character, commitment, hard work and self-determination.”
For his most fervent admirers, Mr. Ziglar was an inspiring leader who every morning leapt out of bed to the opportunity clock, bussed his wife (“Hey, Sugar Baby”), and willed himself into a positive mindset by seldom lingering on crime stories and celebrity gossip while scanning his morning newspaper.
Texas Monthly described Mr. Ziglar’s love of comic strips, stories about sports teams that win and human interest tales that touched on the miraculous. He clipped them out and stored them in a file cabinet brimming with anecdotes about people who overcame disabilities and poverty and made it to state championships and the executive suite.
“Isn’t it amazing,” he told Texas Monthly, “how we are designed for accomplishment, engineered for success, and endowed with the seeds of greatness?”
Advancement in all its forms appealed to Hilary Hinton Ziglar, who was the 10th of 12 children born in rural Coffee County, Ala., on Nov. 6, 1926. He was raised by his widowed mother in Yazoo City, Miss.
After Navy service at the end in World War II, he was married in 1946 to Jean Abernathy. He attended the University of South Carolina, but he was a middling student and left to work as a door-to-door cookware salesman.
As he was promoted through the ranks of the company, Mr. Ziglar became drawn to the power of self-help speakers and their ability to influence others. He began giving talks at church and Rotary Club meetings, often reprising his mother’s advice and relating his own experiences of smiling through setbacks and grief.
He settled in the Dallas area by the late 1960s, initially for a job training workers at a direct-sales company. The business soon folded, but the demand for Mr. Ziglar’s speaking had intensified. He launched a business called the Zigmanship Institute, now simply known as Ziglar Inc.
His first book, “Biscuits, Fleas, and Pump Handles,” published in 1974 and later retitled “See You at the Top,” urged readers to re-evaluate their lives with a “checkup from the neck up” and to quit their “stinkin’ thinkin.’ ”
Mr. Ziglar spoke often of his religious awakening in 1972 and invoked his faith in book titles such as “Confessions of a Happy Christian” (1978) and “Confessions of a Grieving Christian” (1998), which he wrote after the death of his eldest daughter, Suzan Witmeyer, from pulmonary fibrosis in 1995.
His other books included “Courtship After Marriage” (1990) and “Staying Up, Up, Up in a Down, Down World” (2000). He wrote a memoir in 2002.
Mr. Ziglar, who sometimes earned tens of thousands of dollars per speech and other times waived his fee, kept up a rigorous touring schedule until retiring in 2010.
Besides his wife, of Plano, survivors include three children, Cindy Ziglar Oates of Southlake, Tex., motivational author Julie Ziglar Norman of Alvord, Tex., and Tom Ziglar, who is now chief executive of Plano-based Ziglar Inc.; seven grandchildren; 12 great-grandchildren; and a great-great-grandson.
Mr. Ziglar adapted his maxims to every aspect of his life, not least the golf course. Every day, he sought to break 70 but never did.
“Yesterday ended last night,” he liked to tell himself. “Today is a brand-new day. And it’s yours.” 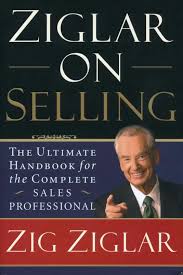