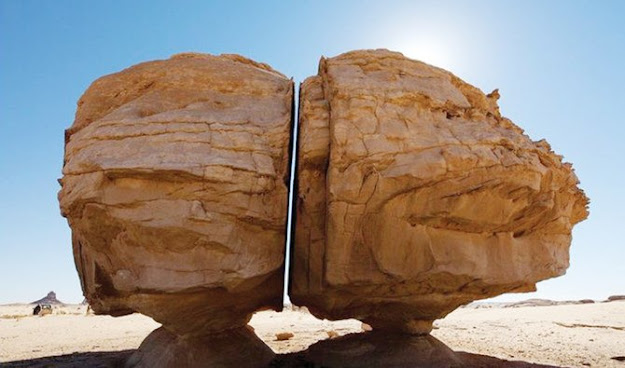 JEDDAH: Alongside the hills and mountains of Saudi Arabia are little-known archaeological treasures, such as Al-Naslah Rock in Tabuk and Camel Rock of Al-Wajh in the northwest — eye-catching “landmarks that document the land’s heritage,” according to one expert.

Eight-meter-long Al-Naslah Rock appears to have been sliced in half. Historians and geologists have been unable to identify the cause of the split, though centuries of erosion caused by sand and strong wind are believed to be responsible.

Speculation dates the splitting of the rock back to the time of the Thamud, an Arabian tribe that inhabited the region almost 2,800 years ago.

“These rocks are made up of sand residue that has built up over the past 488 million to 542 million years,” geologist consultant Abdul Aziz bin Labon told Arab News.

He said that the rock split a long time ago, and the proof of that is that each rock’s drawings are completely disconnected from the other, leaving no trace of a connection between them.

“From left to right, the two rocks have completely and cleanly parted. Each side’s drawings are different and dissimilar, meaning it has existed in this split-up state long before man was able to draw upon it,” he added.

Bin Labon believes the drawings date back 15,000 years, meaning the split existed before then.

He said the rock’s name “Al-Naslah” is intriguing. Normally, the name is given to a smaller part of a mountain, but it is reversed in this case. This rock is independent, and so the mountain nearby is named Al-Naslah after this rock.

“Al-Naslah is a useful landmark — it can help people identify the road, and they can mark entrances to valleys and landmarks to pinpoint certain mountains,” he said.

Inhabitants down through the ages have been aware of the importance of these rocks, using their surface to capture tales of their lives, beliefs and the living things they have encountered.

“What makes this rock stand out to people is the clean cut that split it in half and the small platform it stands on. The left-side platform is visibly weaker (smaller) than the right, making it visually appealing,” said Bin Labon.

“The difference in these platforms has made them budge slightly, without one of them falling or crumbling. In my opinion, that is what caused them to split.”

Aside from their beauty, these landmarks document the land’s heritage and culture, and its historic depth, he said.

Najlaa Al-Saeer, an archaeology expert working with the Heritage Commission, said that Al-Naslah rock is made of white sand.

“What distinguishes this rock and gives it an archaeological spark is that it carries drawings and carvings of Thamudic inscriptions, as well as late Islamic writings,” she said.

Another notable structure is an 8-meter-high limestone rock, just south of Al-Wajh in northwest Saudi Arabia.

“Camel Rock resembles a seated camel and is a striking landmark,” said Al-Saeer.

The archaeologist highlighted other natural sculptures across the Kingdom, such as Elephant Rock in Al-Ula governorate in Madinah region, as well as the other Naslah, known as Antarah Rock — a reference to Antarah ibn Shaddad Al-Absi, the pre-Islamic Arab knight and poet.

“These artistic sculptures have been formed by erosion factors over the years, giving the viewer a magical sight,” she said. “They act as wonderful tourist attractions where visitors can marvel at the beauty.”

Al-Saeer believes in the importance of sustaining and cultivating natural heritage.

“These landmarks embody entire civilizations and carry the history of the Kingdom. Saudi Arabia has a large number of archaeological sites and beautiful monuments that deserve the attention and dedication of researchers.”