Lady Liberty trying desperately to keep the freedom torch burning.
In time the people of the United States will come to realize that Barack Hussein Obama used the HAARP weather modifying and earthquake inducing weapon of mass destruction (WMD) on them in October/ November 2012.  In a very short time New Yorkers will come to realize that they are victims of another cowardly 9/11 false flag.  This time their attacker is Barack Hussein Obama.
Barack Obama cannot blame this on any foreign country or fictional terrorist group.    Obama is trying to blame Gob but the evidence clearly lays blame with Obama.
HAARP is, for all intents and purposes, a nuclear bomb – without the radiation and fallout.  Because HAARP is such a destructive military controlled weapon (HAARP is a key component of the U.S. Defense Department Ballistic Missile Defense System.) only the president of the United States can authorize the use of HAARP in any attack.
This attack (HAARP created and steered Hurricane Sandy – CIA cryptonym for SAD (Special Activities Division) + ny (New York) is far more destructive than George W Bush’s 9/11 as millions of New Yorkers and Americans were attacked.  This time, instead of 3000 casualties there are millions.
History.com produced a documentary exposing the existence of HAARP and how it beams concentrated ELF/VLF waves into the ionosphere to affect the weather and as many scientists know, trigger earthquakes.
HAARP stands for: High Frequency Active Auroral Research Program. HAARP is located in Gakona, Alaska and researcher and author Nick Begich refers to it as “Military’s Pandora’s Box”.
In this documentary it states that the US government has 3 HAARP installations, including one in Arecibo, Puerto Rico.  That is where Hurricane Sandy originated from (created) and from where the Sea Base X-Band HAARP (SBX) steered Hurricane SAD NY up the US Eastern coast and into the US.
The Arecibo,Puerto Rico observatory (image below) is called the National Astronomy andIonosphere Center.  It is the world’s largest single-aperture telescope.  The telescope has three radar transmitters that HAARP uses to manipulate and control the weather,  The three radar transmitters have effective isotropic radiated powers of 20 TW at 2380 MHz, 2.5 TW (pulse peak) at 430 MHz, and 300 MW at 47 MHz.
Effective Isotropic Radiated Power (EIRP), also known as Equivalent Isotropically Radiated Power, is the amount of power that would have to be emitted by an isotropic antenna (Arecibo, Puerto Rico) to produce the peak power density observed in the direction of maximum antenna gain.  This ionosphere heating antenna can also be aimed.  To aim the telescope, the receiver is moved. 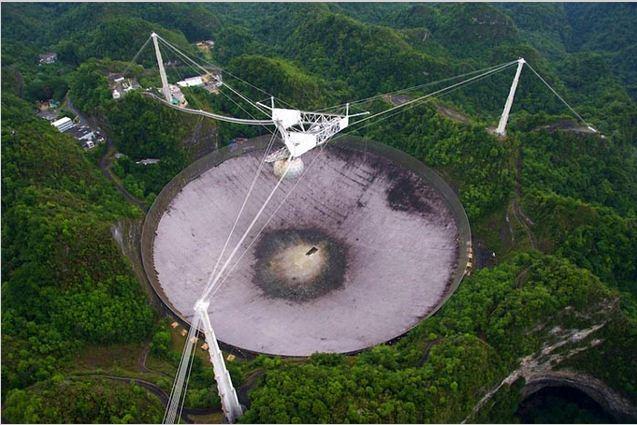 Google Ben Livingston – veteran weather modification expert and former Navy Physicist during the Lyndon B. Johnson presidency.  He has gone on record and revealed that for decades “the US government has had the power to both lessen and increase the severity of adverse weather for their own purposes”. He gives evidence of US government cloud seeding program to affect the weather as far back as the Vietnam War – “Project Stormfury”.
Project Stormfury was a US government experimental program on hurricane modification carried out between 1962 and 1983. The modification techniques involved artificial stimulation of convection outside the hurricane eyewall through aircraft seeding with silver iodide.
The invigorated convection would compete with the original hurricane eyewall, lead to reformation of the eyewall at larger radius, and thus, through partial conservation of angular momentum, produce a decrease in the strongest winds.
The project ended when the scientists determined that the acquisition of necessary ingredient for successful seeding, supercooled water, was just too massive and expensive to proceed.  Project Stormfury was revived with the development of HAARP during the Clinton / Gore administration.
HAARP heating of the ionosphere (active aurora) has the ability to create, manipulate and steerhurricanes.  With the building of the Sea Based X-Band HAARP platform and the unmanned Boeing X-37B Orbital HAARP the US government can now target and attack any country in the World, including their own – Hurricane Katrina and  Hurricane Sandy – and cause nuclear size devastation without radiation.
How hurricanes and tornadoes are created using HAARP
By manipulating the jet stream (pushing or pulling it off course) HAARP can modify the weather. HAARP can alter the path an existing high pressure weather system (clear skies) or low pressure weather system (storm clouds) anywhere on Earth just by heating the ionosphere over the target region.
HAARP can also create a column shaped hole with a diameter of 30 miles (from land (Alaska HAARP), sea (SBX HAARP) or space (X-37B Orbital HAARP)) that rises a couple of hundred kilometers through the atmosphere. The lower atmosphere then moves up the column to fill in that space, and it changes pressure systems below. The result of hot surface air being sucked up into the column to fill the HAARP created column shaped hole is a HAARP created hurricane (if HAARP column shaped hole is made over water) or tornado (if HAARP column shaped hole is made over land).

Even though the HAARP created Hurricane Sandy has already made landfall and is now gone Obama’s 9/11 is not over and done with.
The attack is still ongoing.  Millions are still suffering from the Hurricane Sandy attack as they still have no electricity and millions are now forced to start over and rebuild their HAARP destroyed lives.
Millions have lost their democratic right to cast their ballots asHurricane Sandy affected at least 24 states.  Even with all this mass destruction FEMA and the DHS are still planning for and preparing for the next stage of Obama’s 9/11 – a HAARP triggered earthquake.
- November 05, 2012
Email ThisBlogThis!Share to TwitterShare to FacebookShare to Pinterest
Newer Posts Older Posts Home
Subscribe to: Posts (Atom)