A model of a previously unseen Russian unmanned air vehicle potentially capable of performing strike missions has been inadvertently revealed, with the regional republic of Tatarstan's government having posted images of the design online following a ministerial visit. 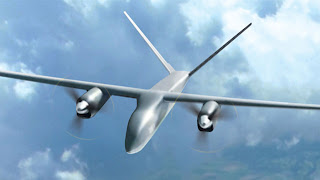 Pictures showing the Altius UAV were briefly published on the website after a visit to Tatarstan by Russian defence minister Sergei Shoigu on 5 February.

They were subsequently removed, but had already been reproduced by the business daily Vedomosti.
One image taken from the rear of the model shows a high-winged aircraft apparently powered by two turboprop engines, with the design also featuring a slab-sided rear fuselage and a V-shaped tail.

Sokol also later posted a graphic of the type on its website showing its streamlined forward fuselage, but without a representative sensor payload or communications equipment depicted.

Tatarstan-based Sokol and St Petersburg-based Tranzas won a 1 billion rouble ($33 million) contract in 2011 to develop a 5t-class medium-altitude, long-endurance UAV provisionally named Altius and a 1t-class system called Inokhodyets (Wanderer).
Speaking at the time of the award, Tranzas vice-president Viktor Godunov told ARMS-TASS that the new systems would be competitive with their foreign counterparts, have "colossal range and endurance" and be capable of "all missions, including strike".
Sokol is responsible for aircraft construction and the supply of ground systems, with Tranzas developing control systems and electronics for the Altius and Inokhodyets. Both should make their flight debuts during 2014, and enter detailed testing in 2015, according to Russian media reports.

Russia Tries To Remove Images of New Drone From the Internet

An MQ-9 Reaper at Creech Air Force Base in Indian Springs, Nev. Russia's "Altius" drone appears to be similar to the Reaper


Photo by Ethan Miller/Getty Images
There’s not much that can be done to suppress a government secret once it is published on the Internet. But that hasn’t stopped Russia from trying.
Earlier this month, a government website for the Republic of Tatarstan let slip never-before-seen images of a new Russian military drone apparently capable of conducting strike missions. Shortly after, the images vanished from the website—but not before they were snatched and reproduced by Russian news outlets and FlightGlobal.
The Republic of Tatarstan is a federal subject of Russia located about 500 miles east of Moscow. The images of the drone, named “Altius,” were reportedly posted following a visit to the region from Russian Defense minister Sergei Shoigu on Feb. 5.
The Altius model depicted in the images looks somewhat similar to the “Reaper” drone used by the British and U.S. militaries, gray in color with high wings at its rear and a streamlined nose.
FlightGlobal reported that two Russian companies—Sokol and Tranzas—won a contract worth $33 million in 2011 to develop two new drones, Altius and another smaller drone called “Inokhodyets” (which translates as “Wanderer”).
A representative from Tranzas previously told the website ARMS-TASS that the systems are designed to be competitive with their foreign counterparts, to have "colossal range and endurance," and to be capable of "all missions, including strike."
According to FlightGlobal, the drones are due to make their maiden flights in 2014 and enter detailed testing in 2015.
Russia’s push to develop new drone technology is in line with what is happening across the world.
While the United States and Europe invest heavily in building a new generation of stealth drones, countries in the Middle East, Asia, and Africa are also reportedlyshowing interest in getting their hands on the latest unmanned aircraft.
Last year, Iranunveiled a new military drone, and earlier this week the United Arab Emirates announced a $200 million deal to purchase an undisclosed number of unarmed Predators from the U.S. firm General Atomics.
Export restrictions remain in place dictating which countries can get their hands on American drone technology.
But Reuters reported Monday that General Atomics is hoping to get approval to sell to more countries, especially in the Middle Eastern market.
"We are talking to all of the Gulf (Arab) countries," a General Atomics spokesman was quoted as saying.
The use of drones for domestic surveillance and “targeted killing” has been a significant source of public controversy.
But that doesn’t seem to be too much of a concern for military contractors—who look set to cash in regardless. Spending on drones is expected to double in the next decade, with sales worldwide estimated to be worth more than $89 billion over the same period.
- February 21, 2013
Email ThisBlogThis!Share to TwitterShare to FacebookShare to Pinterest
Newer Posts Older Posts Home
Subscribe to: Posts (Atom)