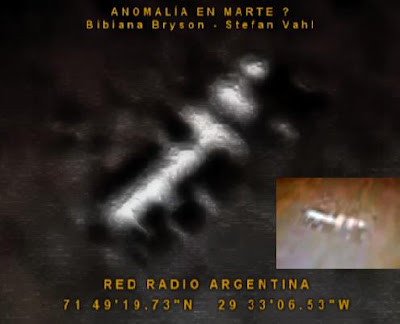 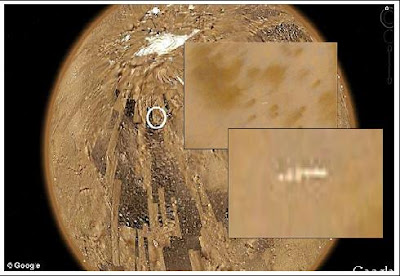 A self-described "armchair astronaut" claims to have found a base on the planet Mars using a satellite imaging map. He thinks the base could have been made by aliens

The video David Martines uploaded Â to YouTube has been viewed more than 850,000 times. He says the 750'-by-150' cylinder-like structure that he's zoomed in on using Google Mars looks like it's made for people to inhabit. In the video, Martines say he assumes people live in the cylinder or have lived in it.

He named the shape "Bio Station Alpha." Experts told Space.come that the image was most likely caused by "cosmic energy" interfering with the cameras--not by aliens.

"It looks like a linear streak artifact produced by a cosmic ray," Alfred McEwen, a planetary geologist at the University of Arizona told Space.com. Cosmic rays, which are emitted by the Sun and other stars, don't make it to Earth because of its magnetosphere.

"But with space images that are taken outside our magnetosphere, such as those taken by orbiting telescopes, it's very common to see these cosmic ray hits. You see them on optical images and a lot of the infrared images too."

You can watch the video below:

A GOOGLE geek has found what he believes is a 'space station' on Mars.

He found the spec on the Red Planet by accident but has provided fellow explorers with the coordinates of the 'object' so they can discover it for themselves.

American armchair astronaut David Martines posted a clip of his trip to the surface of the planet on YouTube.

He used the search giant's maps of the astral body and his video has already clocked up a staggering 58,000 views. 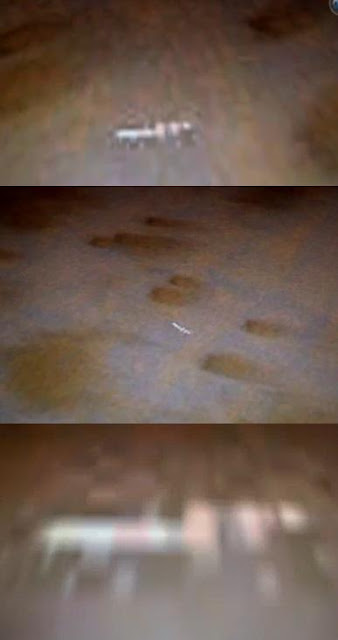 Unlike mountains and other features on the surface, the white 'building' appears to have blue and red stripes painted on it.

According to David's calculations it is also huge - measuring 700ft long by 150ft wide.

He said: "This is a video of something I discovered on Google Mars quite by accident.

"I call it Bio-station Alpha, because I'm just assuming that something lives in it or has lived in it.

"It's very unusual in that it's quite large, it's over 700 feet long and 150 feet wide, it looks like it's a cylinder or made up of cylinders.

"It could be a way station for weary space travellers. It could also belong to NASA, I don't know that they would admit that.

"I don't know if they could pull off such a project without all the people seeing all the material going up there. I sort of doubt NASA has anything to do with this.

"I don't know if NASA even knows about this." 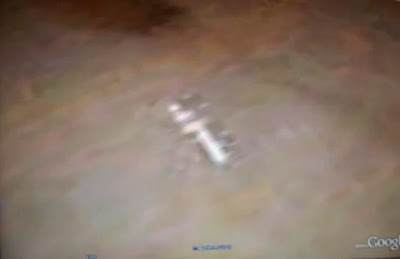 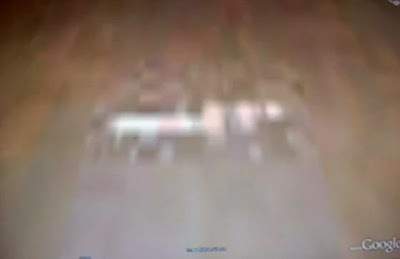 A self-described "armchair astronaut" claims to have identified a human (or alien) base on Mars. David Martines noticed a mysterious rectangular structure that appears to be on the Red Planet's surface while trolling the planetary surface using Google Mars, a new map program created from compiled satellite images of the planet.
This is a video of something I discovered on Google Mars quite by accident," said Martines, the armchair astronaut, in a now-viral YouTube video.
"I call it Bio Station Alpha, because I'm just assuming that something lives in it or has lived in it."
He zooms in the surface anomaly — a long, pixelated, white object — and lists the coordinates as 49'19.73"N 29 33'06.53"W. "It's over 700 feet long and 150 feet wide. It looks like it's a cylinder or made up of cylinders," he says.

David Martines was perusing the surface of Mars using Google Mars, a mapping program, when he saw this "mysterious object."
Has Martines really found evidence of alien life, or a secret space base, as he and some media sources are claiming? No, say experts: "Bio Station Alpha" is simply a glitch in the image caused by cosmic energy interfering with the camera.

"It looks like a linear streak artifact produced by a cosmic ray," said Alfred McEwen, a planetary geologist at the Lunar and Planetary Lab at the University of Arizona and the director of the Planetary Imaging Research Laboratory. McEwen is the principal investigator of the High Resolution Imaging Science Experiment (HiRISE), a powerful telescope currently orbiting Mars.
Cosmic rays are extremely energetic particles emitted by the sun and other stars. For the most part, the Earth's protective magnetosphere blocks them from hitting the planet's surface, McEwen explained. "But with space images that are taken outside our magnetosphere, such as those taken by orbiting telescopes, it's very common to see these cosmic ray hits. You see them on optical images and a lot of the infrared images too," he told Life's Little Mysteries.
As a cosmic ray passes through a camera's image sensor, it deposits a large amount of its electric charge in the pixels that it penetrates. If the particle passes through at a shallow angle to the plane of the camera, it affects several pixels along its path. The result is a bright streak on the image.
The digital compression software that converts the image into a JPEG file then "sort of smears out the image, giving it that pixelated look," McEwen said. What started as a clear streak in high-resolution turns into a streak that, in the armchair astronaut's words, looks like it is "made up of cylinders."

McEwen said that the cosmic ray streak would be much easier to recognize in the raw, pre-compressed image, but many orbiters and telescopes have contributed imagery to create the Mars map, and Google doesn't identify the source image.
"I can't tell whether this image was taken by Viking or what," McEwen said. "The people at Google need to document what the heck they're doing. They should be able to identify what the source of their information is, and let people know so they can go back and look at the raw data."
- June 07, 2011
Email ThisBlogThis!Share to TwitterShare to FacebookShare to Pinterest
Newer Posts Older Posts Home
Subscribe to: Posts (Atom)