A GEOLOGIST has warned a devastating earthquake and tsunami could hit the United States, potentially threatening millions of lives, within the next 48 hours.

Jim Berkland, a former US Geological Survey scientist, who once famously predicted the Loma Prieta quake, said mega quakes usually strike at a new moon or full moon because of the gravitation effect on the Earth…and the next full moon is on FRIDAY.

The maverick, now retired, scientist spoke out after eight powerful earthquakes struck across south Asia and the pacific in the past 80 hours, claiming hundreds of lives in Japan and Ecuador. 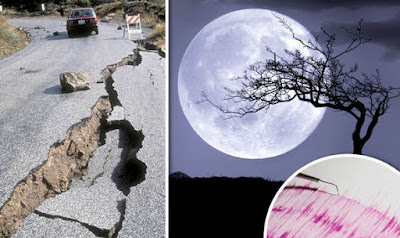 Mr Berkland predicted on October 13, 1989, an earthquake of magnitude 3.5 to 6.0 would strike San Francisco within the next week.

He now says 20 of the world’s last 25 mega quakes have happened during new or full moons.

Mystic who 'predicted Japan earthquake' says BIGGER disaster IMMINENT
He is most concerned about the the San Andreas Fault through California and the Cascadia Subduction Zone, which is further north along the coast of Oregon and Washington State.

He says both areas are long over due a so-called “Big One” earthquake and would likely cause devastating tsunamis to surge over the west coast if it happened.

He said: “Beware the new and full moons.”

He says this causes "equinoctal tides", which are extreme gravitational forces that cause solid earth to expand and contract, in the way ocean tides rise and fall.

Mr Berkland studied geology at the University of California, Berkeley.

You really, really shouldn’t believe everything you read on the internet.
This week, a lot of news outlets have been warning of an incoming ‘mega-earthquake’, set to flatten cities around the world.
There’s just one, tiny problem.
While there have been several of earthquakes in the past week, the quote used to predict a ‘mega quake’ is actually several months old – and about earthquakes in India.
Scientist Roger Bilham of the University of Colorado DID warn of risks of ‘mega-earthquakes – but in January, and specifically in the Himalayas.
But the quote, ‘The current conditions might trigger at least four earthquakes greater than 8.0 in magnitude. And if they delay, the strain accumulated during the centuries provokes more catastrophic mega earthquakes,’ has been jumped on by conspiracy sites, reported as if it was said this week, and is now circulating around the world.

Until a scientist says something specific (and new) about the risks this week, you probably shouldn’t worry that a ‘megaquake’ is about to destroy the world.
More than 260 people died and 2,500 others were injured in the powerful quake in Ecuador, which measured 7.8 on the Richter scale – the strongest to hit the country since 1979.
A state of emergency has since been declared in six of Ecuador’s 24 provinces – with 10,000 armed forces deployed and 4,600 national police sent to the towns near the epicentre.
Homes, buildings and roads have been reduced to rubble – with more than 70% of the town of Pedernales, a town of 40,000, destroyed.