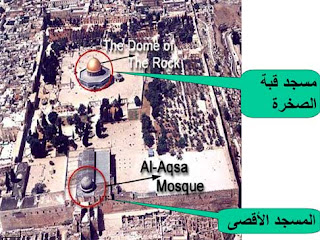 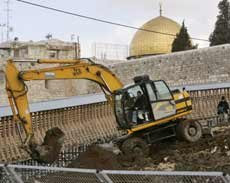 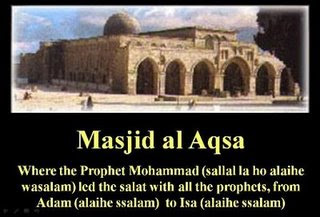 Salah, who has been closely monitoring Israeli excavations in the Old City of Al-Quds for over 25 years, says Israel is paying no attention to protests by Arab and Muslim countries over the perils its digging poses to Islamic holy places.

In recent years, the Israeli government, in coordination with powerful settler groups, began digging an extensive tunnel network throughout the Old City.

Israel describes the tunnels as "tourist projects" that pose no threat to Islamic holy places.

However, Palestinians and some Israeli organizations, including the Israeli Committee Against House Demolition, believe that the ultimate goal is to create a subterranean access route to attack Al-Aqsa and other Islamic shrines in the area.

"I have no doubt that the Aqsa foundations have been greatly weakened due to these tunnels and other excavations," maintains Sheikh Salah.

"You don’t have to be a great architect to realize this. We have already seen holes and cracks all over the area."

A section of the Aqsa Mosque’s yard caved in last year as a result of Israeli excavations underneath.

The collapse happened near the Qaitbay fountain in the western section of the mosque.

The one-meter deep hole was viewed as an ominous harbinger for things to come.

A school in Silwan neighborhood also partially collapsed due to Israeli excavations in the area.

"They want to do it in a way that would appear as is happening as a result of natural causes, such an earthquake."

Salah says that Israel has a "diabolical plan" and is acting on it while Muslims are still just watching and contenting themselves with verbal protestations.

"We need a proactive stance by Muslim peoples and governments. Muslims must send an unmistakable message to Israel and its supporters that Islamic holy shrines in Al-Quds are red lines."

Al-Aqsa is the Muslims’ first Qiblah [direction Muslims take during prayers] and it is the third holiest shrine after Al Ka`bah in Makkah and Prophet Muhammad's Mosque in Madinah, Saudi Arabia.

Its significance has been reinforced by the incident of Al Isra'a and Al Mi'raj — the night journey from Makkah to Al-Quds and the ascent to the Heavens by Prophet Muhammad (Peace and Blessings be Upon Him).

Israeli religious leaders, including Knesset members, are making no secret of their schemes regarding Al-Aqsa.

The Temple Mount Faithful, an extremist fanatical group, is dedicated to the demolition of Aqsa Mosque and the Dome of the Rock.

The Temple Mount Institute, another extremist Jewish society, had prepared detailed plans for the rebuilding of the alleged Solomon Temple on the rubble of Al-Aqsa.

It has a large prototype of the temple, special clothes for its rabbis, special places for sacrificial offerings, incense chalice, copper vessels for meal offerings, silver vessel for wine libation and other offering implements.

In recent years, the Israeli occupation authorities have allowed Jewish extremists to pray inside the Haram al Sharif esplanade.

Muslim Waqf (religious endowment) officials have warned that allowing Jews to pray at the Haram is only part of the larger scheme to usurp the Islamic shrines.

"I think they want to secure a foothold, which they would later use to consolidate and expand Jewish presence," maintains Sheikh Muhammed Hussein, Head of the Supreme Muslim Council which oversees the Haram al Sharif.

"This is why Muslims all over the world, people and governments, must protest loudly this brazen and provocative aggression on the sanctity of Islamic sanctuaries."

Sheikh Raed Salah, who has dedicated himself to exposing Israeli schemes in Al-Quds, says Muslims around the world should realize that his repeated warnings are not at all exaggerated.

"When will Muslims come to realize that the dangers are real? When the Mosque is destroyed and the news of its destruction appears on Al-Jazeera?"

He had one clear message to Muslims and those who care about Al-Quds and Al-Aqsa.

"Only a genuine and fast awakening by Arabs and Muslims can help, and this is exactly what we are trying to effect."