A powerful 7.8-magnitude earthquake hit southwestern Pakistan on Tuesday, killing at least 45 people in Balochistan, besides creating a new island off the Gwadar coastline in its wake, Express News reported.
Tremors were felt as far as the Indian capital New Delhi.
The quake struck at 4:29 pm local time (1129 GMT) around 100 kilometres (60 miles) southwest of the city of Khuzdar in Balochistan province, at a depth of 15 kilometres.
The United States Geological Survey (USGS) measured the earthquake at magnitude 7.8, recording its duration as eight seconds.
On the Gwadar coastline, the quake created a small island about half a mile into the sea near an area called ‘Jhanda’, according to Express News.
The newly appearing island is said to have a mountainous terrain rising up to a hundred feet. A large crowd was seen gathering at the site to see the new island.
The area of the epicentre is sparsely populated, but the USGS issued a red alert for the quake, warning that heavy casualties were likely, based on past data.
A senior Pakistani meteorologist, Muhammad Riaz, told Dunya TV station it was a “major” earthquake and “heavy destruction” was likely.
Minor tremors were felt as far away as New Delhi, while office workers in the city of Ahmedabad near the border with Pakistan ran out of buildings and into the street.
Mumtaz Baluch, senior local administration official in Awaran district, 350 kilometres southwest of Quetta, told AFP: “There are reports of houses being collapsed in the district due to earthquake.”
“We have dispatched our teams to the affected area to ascertain the losses.”
In April a 7.8-magnitude quake centred in southeast Iran, close to the border with Baluchistan, killed 41 people and affected more than 12,000 on the Pakistan side of the border.
People working in offices Karachi rushed out of their building and sat on the footpaths along the roads or stood away from the buildings.
“My work table jerked a bit and again and I impulsively rushed outside,” Noor Jabeen, a 28-year woman working for an insurance company said while breathing heavily.
“It was not so intense but it was terrible,” said Owais Khan, who works for a provincial government office.
“Whenever I feel jolts it reminds me of the 2005 earthquake in Kashmir,” said Amjad Ali, 45, IT official standing on the road said.

By MUHAMMAD LILA and HABIBULLAH KHAN

This image shows what appears to be a new island off the coast of Pakistan after the Sept. 24, 2013 earthquake struck the country.
Latif Baloch
A massive earthquake struck a remote, rural area in Pakistan today, killing at least 39 people and creating a new island off the Pakistani coastline.
"It was nothing short of a miracle," Behram Baloch, a resident of the southern port city of Gwadar, told ABC News referrign to the new island.
Accounts of the size and shape of the island vary. Baloch describes it as roughly 200 feet long, jutting out from the water roughly a quarter mile from the coastline. Pakistan TV channels broadcast footage of the island, shot from land, showing a grainy, rocky mass surrounded by water.
A fisherman who saw the island being formed say it was a gradual process, not sudden like an apparition.
"All the people from the village came out to see it and were praying at the same time," he says. "Tomorrow, I will go to see it up close."
But for as much as the earthquake created, it also destroyed.

Measuring 7.7 magnitude according to the U.S. Geological Survey, the earthquake was felt as far away as India's capital, Delhi, and Karachi's biggest city, Karachi. The epicenter was a rural area in Balochistan, Pakistan's biggest but least populated province, bordering Afghanistan and Iran. The area consists of villages with mostly mud-brick homes and poor to non-existent transportation infrastructure, leaving rescue teams worried the death toll will rise sharply overnight.
Pakistani TV channels aired footage showing a steady stream of panicked workers in Quetta, the nearest major city to the quake's epicenter, flowing out from their buildings after the first tremors hit. Residents say the shaking lasted for as long as a minute before it subsided.
Initially the USGS registered the quake as a 7.4, but quickly changed its assessment. Within hours of the initial quake, the USGS registered two additional ones, measuring 5.9 and 5.6, both in the same area where the first one struck.
The deputy speaker of the Balochistan Provincial Assembly, Abdul Qadoos, told news agencies he believes at least 30 percent of all houses in Awaran, the village closest to the epicenter, were destroyed.
To help with rescue efforts, the Pakistani army deployed 300 soldiers to the affected area, a number that is expected to rise to 1,000 by Wednesday morning. The home base for rescue efforts its Khuzdar, one of the regions hard hit by the quake, with a population of more than half a million.
"Night flying helicopters with medics on their way," Major General Asim Bajwa, who handles external communication for the Pakistani military, tweeted.
Rescuers face a daunting task that poses several significant challenges. For one, getting to the hardest hit areas will be, literally, an uphill struggle. The area is rocky and partly mountainous, populated by several Pakistani tribes, some of whom are nomadic. The nearest major city, Quetta, is an eight-to-ten hour drive away. The area is overwhelmingly rural.
Damage to cell phone towers has made communication to some villages all but impossible. Pakistan also suffers from chronic electricity outages that can last for several hours, especially in smaller villages and towns. There is a concern that what little power the area received may have been cut off due to damaged transformers.

An aerial photograph from Pakistan's GEO TV shows a new island in the Arabian Sea spawned by an earthquake which struck the region, Sept. 24, 2013.
/ GEO TV
Pakistani officials were investigating a small island that appeared off the coast of Pakistan after the quake, apparently the result of earth and mud pushed to the surface by the quake.
Gwadar Police Chief Pervez Umrani said people gathered on the beach to see the land mass, which was about 30 feet high and 109 yards long.
The head of the Geological Survey of Pakistan confirmed that the mass was created by the quake and said scientists were trying to determine how it happened. Zahid Rafi said such masses are sometimes created by the movement of gases locked in the earth under the sea, pushing mud and earth up to the surface in something akin to a mud volcano.
"When such a strong earthquake builds pressure, there is the likelihood of such islands emerging," he said. "That big shock beneath the earth causes a lot of disturbance."
To get a better idea of what the island is made of and how permanent it is, scientists will have to visit and get samples of the material to see if it's mostly soft mud or rocks and harder material. He said these types of islands can remain for a long time or eventually subside back into the ocean, depending on their makeup.

Pakistan quake island unlikely to last: Experts(AFP) / 25 September 2013
A small island created in the Arabian Sea by the huge earthquake that hit southwest Pakistan has fascinated locals but experts say it is unlikely to last long.


The 7.7-magnitude quake struck on Tuesday in Baluchistan’s remote Awaran district, killing more than 200 people and affecting hundreds of thousands.

Off the coastline near the port of Gwadar, some 400 kilometres (250 miles) from the epicentre, locals were astonished to see a new piece of land surface from the waves.

“It is not a small thing, but a huge thing which has emerged from under the water,” Gwadar resident Muhammad Rustam said.

“It looked very, very strange to me and also a bit scary because suddenly a huge thing has emerged from the water.”
Mohammad Danish, a marine biologist from Pakistan’s National Institute of Oceanography, said a team of experts had visited the island and found methane gas rising.

“Our team found bubbles rising from the surface of the island which caught fire when a match was lit and we forbade our team to start any flame. It is methane gas,” Danish said on GEO television news.

Gary Gibson, a seismologist with Australia’s University of Melbourne, said the new island was likely to be a “mud volcano”, created by methane gas forcing material upwards during the violent shaking of the earthquake.

“It’s happened before in that area but it’s certainly an unusual event, very rare,” Gibson said, adding that it was “very curious” to see such activity some 400 kilometres from the quake’s epicentre.

The so-called island is not a fixed structure but a body of mud that will be broken down by wave activity and dispersed over time, the scientist said.

A similar event happened in the same area in 1945 when an 8.1-magnitude earthquake at Makran triggered the formation of mud volcanoes off Gwadar.

Professor Shamim Ahmed Shaikh, chairman of the department of geology at Karachi University, said the island, which has not been named, would disperse within a couple of months.

He said it happens along the Makran coast because of the complex relationship between tectonic plates in the area. Pakistan sits close to the junction of three plates — the Indian, Arabian and Eurasian.

“About a year back an island of almost similar size had surfaced at the similar distance from the coast in the Makran region. This would disperse in a week to a couple of months,” Shaikh said.

For example, in the massive 9.5-magnitude earthquake in Chile in 1960 — known as the world’s largest ever — whole fishing villages were thrust “several metres” upwards and wharves suddenly located hundreds of metres inland, Gibson said.

Such uplift events are relatively common in the Pacific’s so-called “Ring of Fire”, a hotbed of seismic and volcanic activity at the junction of several tectonic plates.

A thundering 8.0-magnitude quake in the Solomon Islands in 2007 thrust Ranogga Island upwards by three metres, exposing submerged reefs once popular with divers and killing the vibrant corals, expanding the shoreline outwards by several metres in the process.

During the massive 9.2-magnitude earthquake off Sumatra which triggered a devastating tsunami across the Indian Ocean in 2004, several islands were pushed upwards while others subsided into the ocean.


The Aceh coast dropped permanently by one metre while Simeulue Island was lifted by as much as 1.5 metres, exposing the surrounding reef which became the island’s new fringe. 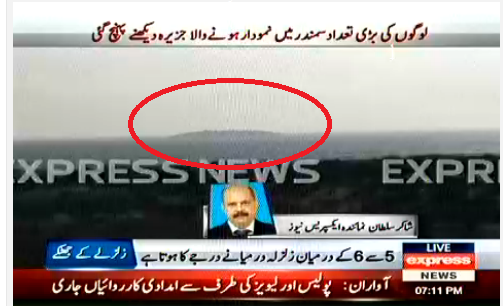