What 'Situation Room Photo' reveals about us 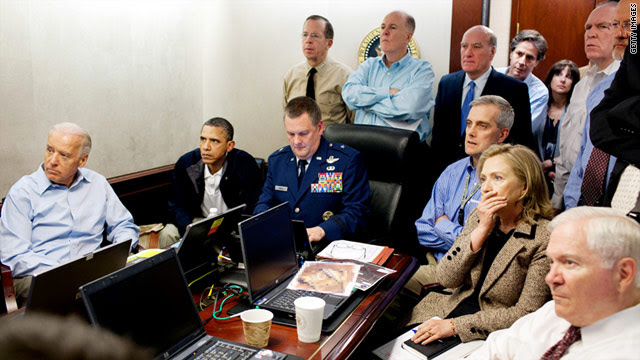 (CNN) -- By now, the photo is a classic. It's become the most viewed image on Flickr -- a mesmerizing picture that suggests as much as it reveals.

You may know it simply as the "Situation Room Photo," but you may not be aware of what some say are three subliminal messages that make it so powerful and unusual.

The photo captures President Barack Obama huddled with his national security team in the White House Situation Room as they monitor via live video the capture and killing of Osama bin Laden.

Most commentators have focused on the historic nature of the photo: Obama staring at the screen with a grim intensity; Secretary of State Hillary Clinton, covering her mouth to repress her reaction -- the epicenter of U.S. military power hunting down its most hated foe.

But look deeper and that photo becomes historic in a more subtle way. It's a snapshot of how much this nation's attitudes about race, women and presidential swagger are changing, several scholars and historians say.

Obama photo one for the history books

"The photo is visually suggestive of a new American landscape that we're still crossing into," says Saladin Ambar, a political science professor at Lehigh University in Pennsylvania.

"When Obama was elected, there were some people who thought that we had crossed a racial threshold," Ambar says. "What his presidency is revealing is that there are many crossings."

The photo crosses one threshold of race in its unusual framing of an African-American man threatening violence, one black commentator says.

For much of U.S. history, the black man has often been portrayed as the threat to America's safety -- the angry man, the thug, the one you cross the street to avoid, says Cheryl Contee, co-founder ofJack & Jill Politics, a blog focused on current affairs from a black perspective.

But in the Situation Room photo, Contee says, the black man is America's protector.

The photo is visually suggestive of a new American landscape that we're still crossing into.
--Saladin Ambar, political scientist

There's no historical precedent for this image, she says. White Americans now see a black man not just as their president but their "protector in chief," Contee says.

Podair says Obama has always been careful to avoid the angry black male stereotype in his public persona, but has acquired another image -- that of detachment, even weakness.

The photo of Obama hunkered down with his national security team watching the stalking and killing of bin Laden solves both problems, Podair says.

"He can now appear strong without being threatening. After all, he's on our side. Obama can now take up his white predecessors' mantle of 'protector in chief,' " Podair says.

It's not certain how long that mantle will stay attached to Obama, but at least one political scientist says he's already seen the photo's impact.

"This is one of the rare times that Tea Party supporters have referred to Obama as President Obama," says Ari Kohen, an associate professor of social justice and political science at the University of Nebraska-Lincoln.

Women at the center of power

The photo also breaks ground when it comes to women, others say.

The image is laced with testosterone: a crowded room full of powerful military and political men, some with medals bristling across their uniforms, gathered to drop America's hammer.

Some online viewers compared it to the photos of D-Day during World War II. Another said it was a portrait of "the nexus of power in the Western world."

But there were no iconic shots of women storming the beaches of Normandy or raising the flag at Iwo Jima.

Go back and examine the defining historic photos of American military might in action, and women are absent, historians say.

A glance at the now famous photos of President John F. Kennedy and his staff during the Cuban missile crisis is typical, says Ambar, the Lehigh University professor.

The photos show square-jawed men in crew cuts and uniforms surrounding Kennedy in the White House. You can practically smell the Aqua Velva in those old black-and-white photos.

"But if you go back and look at the Cuban missile crisis photos and the movies about it, there's no women," Ambar says. "In the movie 'Thirteen Days,' the only woman in the film was Kennedy's secretary."

Yet you see two powerful women in the Situation Room photograph -- Clinton and Audrey Tomason, director for counterterrorism, who is straining to see from the back. Their inclusion shows how far women have come, Ambar says, even though Clinton's response is ambiguous because she's covering her mouth in what looks to be alarm.

"God only knows what she's seeing on the screen," Ambar says.(Clinton has since said she was trying not to cough.)

Lori Brown, a sociologist, says showing two women at the center of American military power is noteworthy, but Clinton's gesture undermines some of its impact.

"Women are often more physical in their emotional responses and in a 'power situation' it may not seem as acceptable, but times are changing and the Situation Room needs to change, too," says Brown, a professor of sociology at Meredith College in Raleigh, North Carolina. "Her emotions were more obvious, but I am sure many of the men in the room felt the same way she did."

Obama gets a little swagger

The photo finally crosses the threshold of what may be called presidential swagger, historians say.

American presidents have traditionally sold themselves as our alpha male. Theodore Roosevelt went safari hunting; Ronald Reagan cleared brush at his ranch in a cowboy hat; George W. Bush did his "Top Gun" imitation when he donned a flight suit on the deck of an aircraft carrier.

There's a certain kind of machismo and swagger that Americans expect their president to reflect.
--Clarence Lusane, author
RELATED TOPICS

"There's a certain kind of machismo and swagger that Americans expect their president to reflect," says Clarence Lusane, author of "The Black History of the White House."

Projecting that presidential swagger was so powerful that it obscured some presidents' serious illnesses, such as President Franklin Roosevelt's polio and Kennedy's hobbling assortment of ailments, including a bad back, Lusane says.

"They were both very ill. Kennedy could barely stand for two hours. But they never let those images out because they had to project toughness. Obama, though, is a different animal."

The photo shows why.

If someone didn't know who Obama was, he or she probably couldn't tell that he was the president in the room, some scholars say.

"He's not in the tallest chair," says Brown, the sociology professor at Meredith College. "He's not the center of attention. He's not even in the middle of the room."

Yet Obama's willingness to be photographed without the typical Oval Office swagger gives birth to a new type of swagger, says Contee of Jack & Jill Politics.

She says that photo shows Obama's self-assurance and leadership style. He seeks out the opinions of his advisers. He believes in collaboration -- all while he's taking down the baddest terrorist on the planet.

He doesn't need to wear a "Top Gun" flight jacket to project strength, she says.

Expect more snapshots such as the one from the Situation Room, says Ambar, the Lehigh University professor.

As Obama moves into the third year of his term, photos will capture moments that show how far we've come.

"That's part of what being the first African-American president is all about -- we're all being transformed together," he says.

Ambar says he was so intrigued by the Situation Room photo that he cut it out to study it. He's still parsing its meaning.

"It is an image unimaginable 30 years ago," he says. "Let us hope we have more of these in the nation's future."